The show, finalist for the “Childhood scenario award 2020”, aims to tackle in a fun and poetic way the theme of building a personal identity and, in particular, the boundary between real identity and virtual identity, investigating phenomena such as gender swapping (the choice of virtually presenting oneself with a sex that is not one's own), cyberbullying and personal branding (the act of modifying some aspects of the self, on the web, in order to create a virtual identity mask). 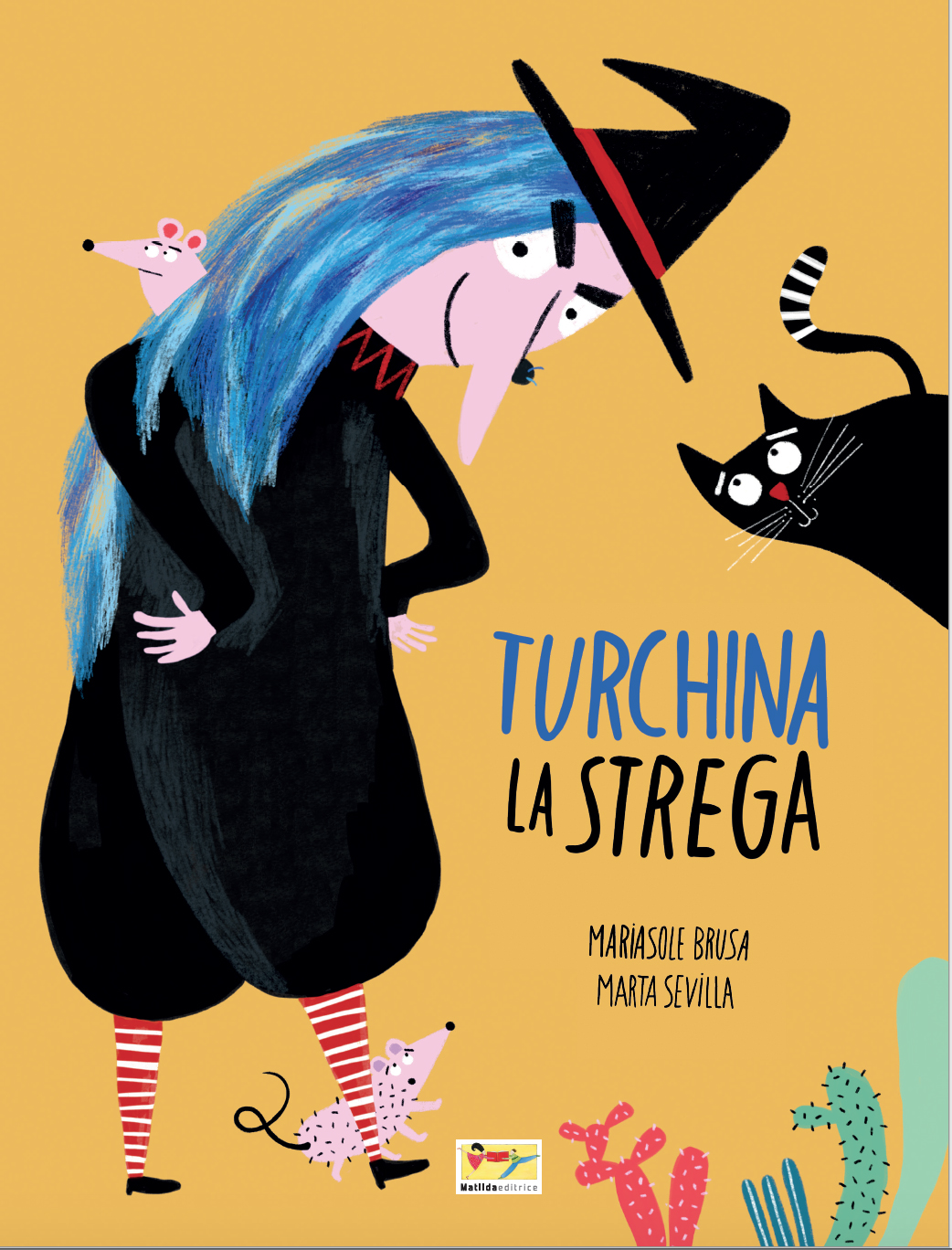 The show Witchy Things comes to life from the book “Turchina la strega" by Mariasole Brusa, winner of the 2019 edition of the International Literary Competition “Narrating parity. A prize for Europe" and inserted by the Internationale Jugendbibliothek of Munich on the White Ravens list, among the 200 most important children's books of 2020. The book is published in Italy by Matilda Edition and has been translated into English, French, Spanish and Catalan. 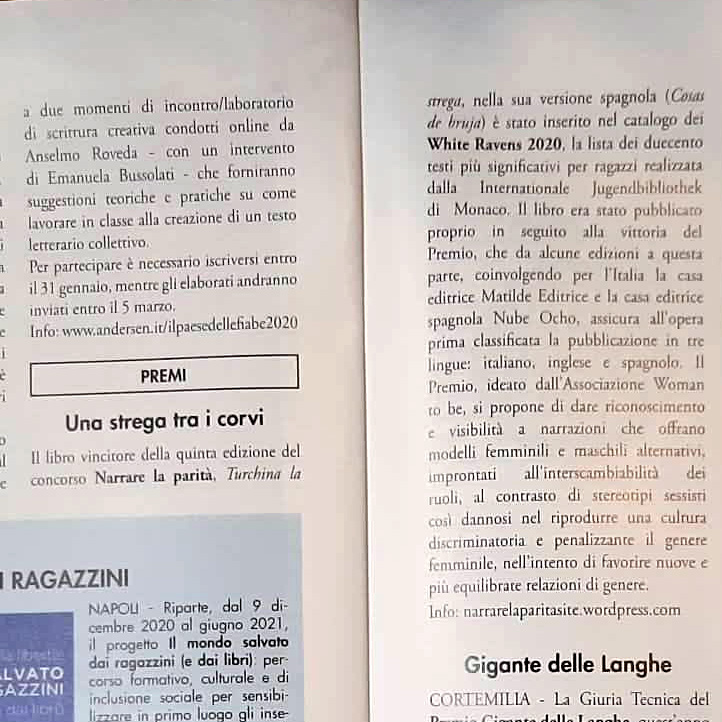 In the show some classic characters, like the witch one, linked to an archetypal and conventional representation, rebel to the imagination to which they belong and struggle to realize their own, very personal, way of being. The same goes for the co-star, the little girl Andrea, a sassy but sensitive little nerd, as intelligent as she is out of the box who challenges all social and gender stereotypes. A single actress plays the two characters who share a condition of loneliness and identity crisis. The witch uselessly aspires to change the colour of her blue hair which makes her so similar to a fairy, to ensure her belonging to the category. The little girl, who is mistaken by all for a little boy, also aspires to search for his own affirmation and social recognition. The two solitudes meet. Both are besieged by internal/external voices: on one hand the mother on the phone and, on the other, the “theatre” of consciousness puppets living in the hair of the witch. The comparison of heterogeneous identities can fill the gap: mirroring the other enriches the perception of oneself.

What is said about us

Witchy Things, from Coppelia Theatre: for a creative dialogue between the repertoire of practices related to figure theatre and film solutions of new generation, in which also the extension of technology of social communication is integrated in an original way in the writing stage. The project is nourished by a multifaceted and inclusive dramaturgy, attentive to the use of props, which, in an ironically gothic universe, question stereotypes of the protagonists in the name of a happy and lively problematization of archetypes of the fairy tale. 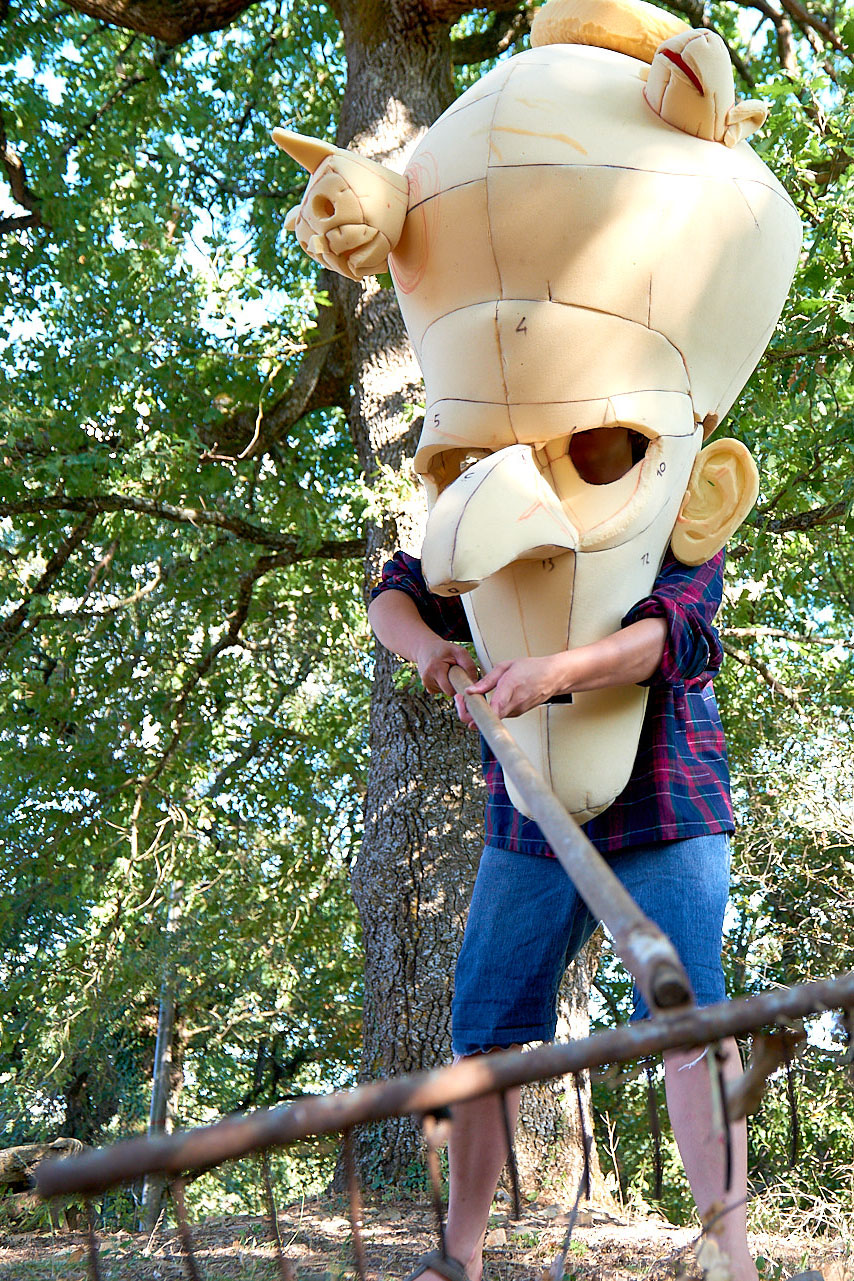 In the show diverse puppetry techniques coexist within an innovative scenic space. One of the actors wears some giant masks (a foam base covered with wool coloured with the needle felting technique) that transform her in a "living puppet"; thanks to an actor research process starting from the study of the super puppet by Gordon Craig. The chignon bun of the witch is also a real theatre: from her turquoise hair sprout various characters: a cat, a toad and a dragon puppy that are animated through sophisticated mechanisms present in the mask itself.

The most ancient traces of felt date back to the third millennium BC. It was used by the Greeks and the Romans for the fabrication of clothes, headgears and cloaks. Felt is a cloth made of carded sheep wool. It is not a fabric, but is produced by felting the fibres. The fibres are wetted with hot water, soaked in soap and manipulated (beaten, rubbed, pressed) or treated with appropriate needles until they are felted. Their binding is given by the interpenetration of the microscopic cortical scales that cover the surface of the hairs. The process is progressive and irreversible. Traditional felt is the colour of the hairs used, but it is possible to produce coloured felt using staple-dyed wool.

The wool used comes from the women’s community cooperative Wire&Fiber, which deals with recovering traditional processes and creating a virtuous network of circular economy allowing local farmers to make usable wool that they would normally pay to dispose of, as well as stimulating female entrepreneurship in small communities.

The witch has a magic mirror, that in the narrative actualization has become the social Instagram: a place of self-representation and recognition through the exteriority of the body, that is, an instrument in which to look at oneself in order to feel accepted and esteemed. Just like the witch in Snow White did with her "mirror of my desires''. It metaphorically portrays Web possibilities. In the mirror the witch confides blindly, but her reflection comes to life (as a projected video image) and ends up deceiving her. Video projections are used in an original and innovative way, making the most of the possibilities offered by synchronicity: the same character-actor has in this way the possibility to interact with himself.